Falken Trade wins the 19th edition of Gazelle of Business 2018 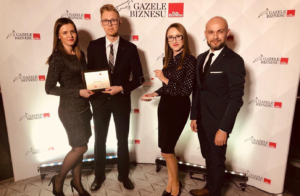 On Monday, March 11, the official Puls Biznesu awards were held. As the only company from the Warmian-Masurian Voivodeship, we were awarded the Gazelle and Business Supergazel. “Gazelles of Business” is the most popular and oldest ranking of the most dynamically developing small and medium enterprises. The project is implemented by economic dailies belonging to the Bonnier publishing group. In Poland, the ranking has been prepared by the daily “Puls Biznesu”, since 2000. “Gazekks of Business” is a title associated with prestige and also a great recommendation that is of considerable importance in business relations with existing and new contractors. The distinction reflects the good reputation and credibility of enterprises, which, thanks to the extremely dynamic development, can cope well even with much larger competitors.